Weekly Market Update from the Office of the CIO

The House passed a $1 trillion infrastructure bill last week. The bill will inject additional money into the economy in the form of infrastructure spending including transportation and initiatives like broadband internet and clean drinking water.

In the same week–October inflation numbers spiked to 6.2% the biggest surge in 30 years. With increased government spending from the infrastructure bill, expect to see inflation continue to drive asset prices higher. 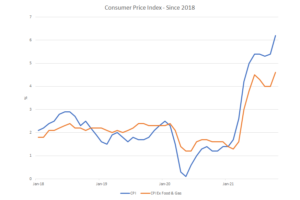 The announcement of the Infrastructure Bill pushed Bitcoin and Crypto prices higher last week. We continue to see all-time highs as cryptocurrencies become a liquid and real-time reflection of the risk trade and the inflation trade. At writing, bitcoin has rallied 4.5% month to date and is near the $66,000 level. In comparison, the S&P 500 is only up 1.77%.

As bitcoin grows in adoption and market cap, its correlation to risk wanes and correlation to inflation increases. Traditional inflationary assets like gold have only seen a modest rise in price this year, with crypto in the headlines and bitcoin riding that wave, performance may be a deciding factor. Investors seeking protection due to an uncomfortable rise in consumer goods like food and gas are considering bitcoin due to improving liquidity, expanded market presence with ETFs, and market transparency. With points of entry on the rise for investors from retail to institutional, we expect to see continued adoption of the asset class as inflation concerns grow.

The price of bitcoin once again made a record high tapping $69,000 on November 10, after almost 3 weeks of consolidation. Along with the new all-time high came a spike of open interest and elevated funding rates. These factors combined with traditional markets reacting to CPI data created the perfect atmosphere for a flush in leverage, especially in offshore derivative markets.

BTC outflows from exchanges have steadily outweighed inflows since late July, suggesting the current rally in price is arriving on one of the most robust periods of accumulation in recent history. Exchange BTC balances remain near the three-year low as bitcoin enters another period of accumulation, helping to cement Bitcoin as a trillion-dollar asset.