War continues as Fed gets hawkish

Last week, the Federal Open Market Committee (FOMC) announced the first rate hike since December 2018, raising it 25 basis points to 0.50%. The expected move is the first of 7 currently projected. The FOMC also provided better color on its strategy to reduce the Fed’s balance sheet currently at almost $9 trillion, mainly comprised of treasury and agency mortgage-backed securities. Reduction strategy could start as soon as May and strategists describe the effect equivalent to at least one rate hike. Fed Chairman Powell provided more comments this morning at an economic conference suggesting a more aggressive approach using 50 basis point hikes instead of the anticipated 25 basis point move. Markets moved lower after comments reinforced Fed’s mission to stay transparent and allow markets to react organically rather than sudden movements and feed volatility.

Week over week, equities moved higher by almost 6%, despite a pullback Wednesday afternoon reacting to Fed’s move. Similarly, the 10-year treasury yield rose about 10 basis points to end the week at 2.15% but jumped higher this morning to the 2.30% level.
Oil analysts are reporting changes in distribution channels due to the continued fallout between Russia and Ukraine. Oil futures turned lower and breached the $100 per barrel level mid-week, but the reprieve was short-lived as prices climbed higher by Friday. Recent headlines concerning a possible ban by the European Union towards Russian oil caused futures to jump higher to $116 a barrel. Unfortunately, the dependency of the EU for Russian sourced oil is higher than the US, which already implemented an oil embargo two weeks ago.

Bitcoin continues range-bound consolidation into the final weeks of the first quarter of the year. The current price consolidation is similar to the range-bound consolidation period of Q1 2019. Near-dated futures contracts currently hold essentially no premium over spot while far-dated futures contracts hold a modest 2% premium over spot. Open interest on the futures and options platform Deribit shows nearly $3 billion in Bitcoin options contracts expiring March 25th. Bitcoin is currently down 40% from all-time highs and down 11% on the quarter, well within the expectations of performance based on prior-year Q1s, historically. Since 2013, Bitcoin’s strongest quarters have been Q2s and Q4s, averaging about +50%, while Q1s and Q3s have averaged +2%.

Technical analysis for Bitcoin continues to suggest the formation of an ascending triangle, which carries a bullish bias. The chart pattern yields a 1.618 Fibonacci extension and measured move of $50,000 to $55,000 and remains active so long as no lower lows in price are achieved. The probability of this pattern resolving as expected declines significantly once the price breaches the diagonal support. Significant downside volume support sits from $32,000 to $38,000, should the pattern fail. The 200-day exponential moving average (EMA) also sits at $44,500, matching the horizontal resistance on the ascending triangle. The 200-day EMA is also used as a litmus test for bullish or bearish trends. A price breach above this level would signify a bullish trend reversal. 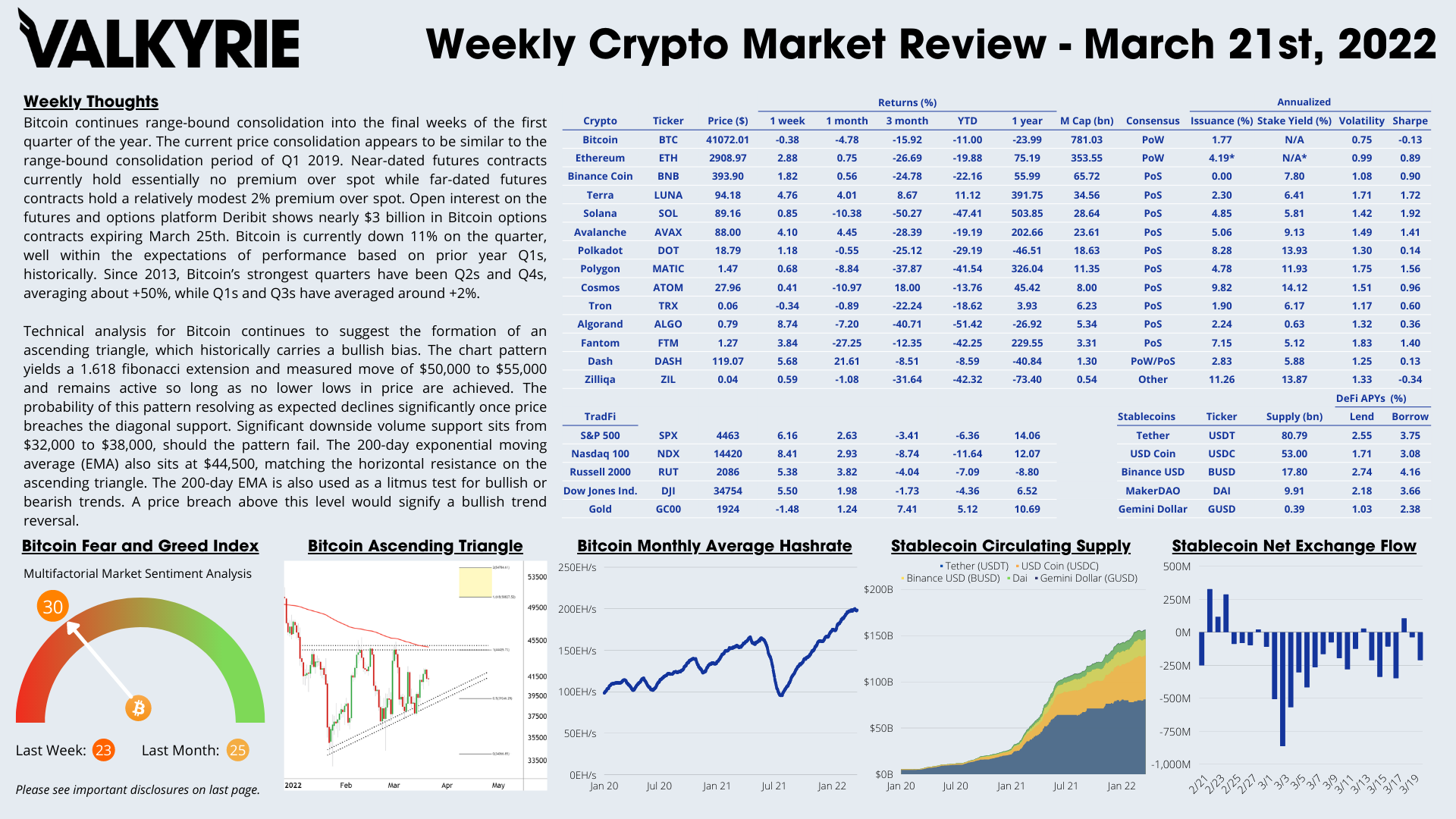